Can A Microwave Oven Interfere With Wireless Devices?

We can all agree that wireless devices and microwaves are in the top 10 creations, one heat up our food and one gives us comfort. However, while they might work great by themselves, they might cause problems for each other when used at the same time.

I love wireless products and use wireless mouses, headphones, earbuds, chargers, you name it.

One thing that I have noticed when using my wireless headphones is that sometimes when turning on my microwave, I hear this static sound in my headphones if I’m nearby.

This static sound confused me for a long time and I decided that I had to figure out what was causing the problem.

Question: Can A Microwave Oven Interfere With Wireless Devices?

Yes. Both your microwave and Wi-fi generally operate on the same 2.4GHz frequency. While your microwave is shielded from leaking radiation, some small amounts may pass through. This could cause problems in the connection between your devices and it’s operating station.

Let’s look into why this happens and what you can do to prevent it.

How does a microwave oven work?

Microwave ovens work by converting the electricity into radio waves. That will send radio waves into the sealed metal box which will bounce off its wall. If there is an object like food or liquid inside, the radio waves will hit the object and vibrate through them on a level not able to be seen by our eyes. This will, in turn, make the molecules inside the food or liquid move much faster which in turns heat up the object. Liquid molecules will generally heat up faster.

Some mention microwave ovens as heating up objects from the inside out, rather than outside in an electrically heated oven. It sounds like a fair statement but it’s technically not the truth. A microwave oven will basically just heat up food faster and more evenly since the radio waves are going straight through the object, rather than just exposing heat on the outside of the object.

Microwaves are made to contain all radiation within and not let any out, however, there could potentially be small amounts leaking out anyways.

Why could a microwave interfere with your Wi-fi?

Generally, our microwaves and Wi-fi operate on the same frequency at 2.4GHz. This means that if a microwave is somehow leaking radiation into our home at a level close to 2.4Ghz, that could potentially cause a problem in the connection for your Wi-fi.

You may not notice it until you use other devices, like in my case, my wireless headphones.

Here you can see the radio signal spectrum for a Wi-fi. For an untrained eye, this is a quite clean spectrum in general with little interference. 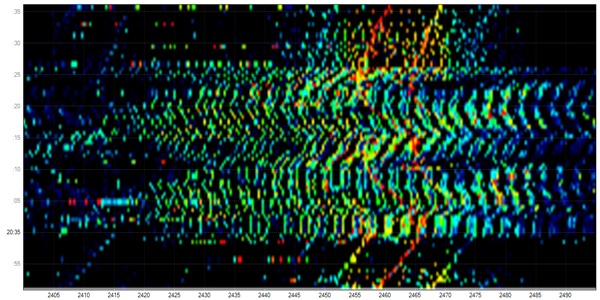 This picture shows what the radio signal spectrum looks like after running a cup of water in the microwave for 30 seconds. As you can see, there is much more interference in terms of radio signals in that spectrum. If your microwave is leaking radio signals or some of your other devices are interfering, this is what is happening in what we can’t see.

For more pictures and more tech-detailed discussions, you can find more information in Peter Grace’s article about Wi-fi interference.

These pictures were made by using a frequency analyzer that can view radio signals that obviously aren’t visible to our eyes.

Other than microwave ovens, there are many other household electronics that could cause problems because they operate on the same frequency. Such as baby monitors, cordless telephones as well as other Bluetooth devices.

What can I do to solve this issue?

Before you throw out our microwave, make sure to try de-activate the other devices in your home that could cause the problem in case it’s not the microwave.

Also, If you are currently operating Wi-fi at 2.4GHz, upgrading to 5GHz could solve the issue as the interference frequencies shouldn’t affect the Wi-fi at that level. One downside with 5GHz technology is that it has less range than 2.4Ghz, while still being stronger.

If you are still experiencing problems after that, you might want to consider returning your microwave to the manufacturer as it shouldn’t be leaking that much radio signals.

As for audio devices, like my wireless headphones, I have yet to find a solution to this. However, the inconvenience is rather small and it doesn’t bug me enough to deal with getting a new microwave at this moment.

Can this interference damage the devices that are affected?

There should not be any damage to any of your devices regardless if there is an interference.

It’s not the actual device that is being damaged but rather just the radio signal spectrum being too crowded in a certain area. In my case, that is in my kitchen.

Does this mean that my microwave is letting out dangerous radiation?

You shouldn’t be too concerned with this issue in terms of safety unless the microwave seems to be underperforming all of a sudden while also causing a Wi-fi interference. As for any product, if it seems to be malfunctioning, you could and should contact the manufacturer or seller and try to solve the issue.

Technically, any GHz for a long period of time could potentially be harmful, but as for with Wi-fi signals, you shouldn’t worry about it too much. If you are concerned, there are some radiation protection guards out there that can act as protecting agent for your router without interfering too many signals.

But based on the guess that you don’t sit next to your microwave or router 24/7, there is not enough danger to panic.

In order for a radio frequency to be harmful or carcinogenic (meaning it could cause cancer), you would have to exposed to a higher GHz than 2.4 or even 5.