Yes. They could potentially cause damage. In general, the output power from your car battery is not always consistent and is not optimized for your phone. If using a faulty adapter, it could lead to your battery overheating and damaging components. This depends on your phone, charger adapter, and, the age of your car.

Being on the road usually means being away from your comfort at home, and that includes charging your phone. While it is a convenience to have a car charger when you are on the go, there are some things to consider.

This article will go into depth on why you should think twice before picking up a cheap charger adapter from the gas station.

Quick Conclusion Of My Stance

I advise you to avoid car chargers and instead use a portable charger from a reputable company. I have have made a list of the best ones in different price classes in another article.

Another idea is to go for a power inverter that is pure sin wave. I will be talking about this more thoroughly later in this article.

Should you charge your phone in the car?

The simple answer is to avoid it. While it is common to do so and it seems very comfortable to do it on the road, there are some potential downsides that I will explain.

So, there are a few aspects to consider when it comes to car chargers.

In general, the best charger for your phone in terms of long term battery health is your original charger. Although many other chargers will work fine and most likely not damage your battery, a car charger could be one that actually might.

Can it damage the phone even if it seems to be working?

They do work, yes. However, there are a few things that could go wrong which could result in damage to your phone or rarely, your car.

Car chargers generally provide your phone with less electricity than it needs because of the inconsistency. This could result in the charger sending out energy faster than it can make up for it. That could in result in your phone stalling or barely charging. Keeping a phone in this state could harm the battery if left stalling for longer periods of time.

Many people use the cigarette lighter for their charging adapter. The general voltage for these cigarette lighters is 12V, which, the charging adapter is there for so it can provide a safe voltage. However, if there were to be a malfunction with the adapter, it could spike the energy output to your phone. Obviously, this is not good for the battery and it could potentially fry it, especially with phones that don’t allow more than 5V for charging.

Also, car batteries are being charged through movement while you’re driving. Depending on the age of your car, it could potentially drain the car battery. As it’s charging up, your phone could be draining energy faster than it can make up for it. This is quite rare in newer cars but if your car is old, this could be a problem.

I personally have a fried battery story when I was trying to charge my phone from the cigarette lighter. It had been working fine many times and one day, I plugged it in and my phone just died and would not start or reset. The charger would not work anymore afterward as my friend’s phone wouldn’t charge either. This was most likely a malfunction in the charger adapter which caused damage to the battery. While it is a quite rare situation that occurred to me, if you can avoid having to pay hundreds of dollars, you might want to consider this.

Are there any car chargers that are safe?

When it comes to being most optimal and safe, charging your phone from your wall power outlet together with a high-quality adapter is the best way. There are many ways to optimize your battery health and this is one of them.

While any adapter could potentially malfunction and cause damage to your phone, it is more likely to happen when you’re using a car battery as it’s technically not as consistent in its power as in a wall outlet. As I mentioned earlier, this is because car batteries are being charged up and down while driving.

If you are looking for ways to charge your phone while going on a road trip, I would advise you to invest in a portable charger or be sure that the inverter you’re using is using pure sin wave.

So, if you’re planning on using a car charger, you should look for those that include that technology as it’s the safer alternative.

An example of a safe inverter is the BESTEK 300Watt Pure Sine Wave Power Inverter. Apart from being a safer charging method for your phone, you can also use this adapter for safe powering for any of your electronic devices. It comes equipped with smart technology that will detect your devices being charged and deliver the appropriate voltage while also having a safety fuse for potential overload. 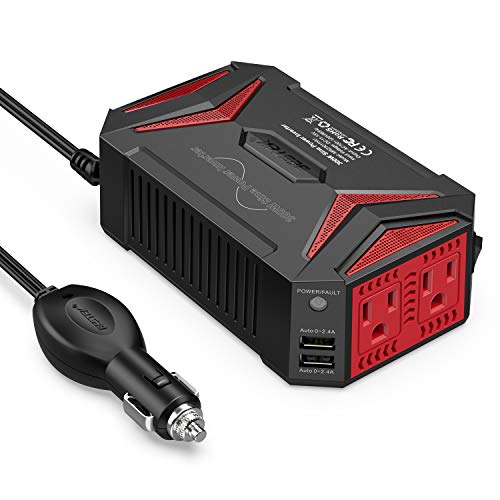 It includes two USB ports as well as two AC ports so you can plug in your laptop for example.

Although it may seem bulky compared to a regular car charger, it is compact and only weighs about 1.6 Lbs.

If you’re going for a portable charger, I strongly recommend the one I’m currently using that is the Anker PowerCore 26800. It includes three USB ports and I manage to get roughly 6-7 full charges on my iPhone X. 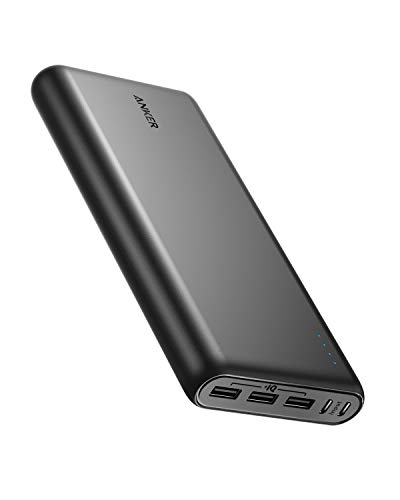 What Does An Inverter Do?

If you’re unfamiliar with power inverters, I’ll give you a brief explanation before going into the different types.

An inverter is an electrical device that converts direct current (DC) into alternating current (AC).

This is why it’s very important that you’re using a high-quality inverter and not the cheapest one you can find at the gas station.

“Modified Sin Wave” and “Pure Sin Wave – What Is The Difference?

When it comes to electronic inverters, you will find these two type of technologies that do the same things but in a different way.

Modified sin wave was the primary at first and it would often work fine in terms of converting the electricity. However, as we are using more delicate circuits in many of today’s devices, it is more more likely to cause damage.

Think of electricity as a wavelength going up and down.

As you can see from the picture provided by Altestore, the modified sin wave has a less smooth transition. This could result in less consistent inverting and potential problems such as overheating.

This is why you want to make sure that you’re going with a pure sin wave instead. Although they may cost more than modified sin inverters, it could be worth it instead of having to buy a new phone if the modified sin wave inverter would malfunction.

Using your phone while driving in general

Something worth mentioning is that you should avoid using your phone at all while driving.

The National Safety Council has done research on the general public and found that texting or using your phone while driving increases your chances of encountering a car crash by almost 10 times.

Having a call on speaker or using a pair of wireless headphones is safer than texting, but to be safe, you should wait.

Something as simple as answering a text or plugging in a charger at a stoplight might not sound like a big deal, but waiting might just save your life when you least expect it. Something to remember is that you are not alone on the road, and while you have control of the situation, other drivers around you might not, and you need to be ready for that.

If it’s not life or death, just wait till you are off the road before using your phone.

There are many ways to charge your phone and some ways are better than others. While a charger could always malfunction at any time, it is recommended to stick with your regular wall power outlet, or if you’re out traveling, be sure to use the proper inverter.

I am not trying to scare anyone off from using their car charger but I hope this has given you some more awareness before using one. I personally only use a car charger if I have an inverter with me that is pure sin wave.

If you are going on a road trip and want your battery to stay on top in the safest way, I advise you to invest in a high-quality pure sin wave inverter or just stick with a portable charger.